Believe it or not, Aleister Crowley had something to say about people who think that a boot is a hat…

We have several posts dealing with Aleister Crowley’s real opponents in this race, including Mickey Mouse, Cthulhu, and Ron Paul. While we engaged the candidate who represents our greatest threat in debate, this is the first time that we will address Vermin Supreme’s platform comprehensively in a blog post.

Shortly afterwards, we accepted Vermin Supreme’s challenge to debate him, but we insisted that Aleister Crowley would not reanimate for the event. We also linked to background information and a video about Vermin Supreme, and to the first media coverage of the possibility of a debate. Vermin again engaged us in the comments to that post. Battle lines began to be drawn.

Finally, the debate took place on Halloween weekend, 2011, in Salem, MA. You can find links to the debate video, photos, and more media coverage in our post about the Aleister Crowley vs. Vermin Supreme debate.

Now, for the first time, we will address Vermin Supreme’s platform completely in this post. Granted, he is a satirical candidate who mirrors the clownish behavior of real politicians and draws our attention to the reality that political discourse has become more about entertainment than many of us are comfortable admitting. That’s great; we’ll play the part of the straight comic and respond in all seriousness with Aleister Crowley’s views on issues like mandatory dental care and free ponies.

In this video we can see Vermin Supreme engaging in a publicity stunt where he brushed the Washington Monument — the world’s largest incisor according to Supreme. We noticed, however, that this did not help the Monument to withstand the August, 2011 5.8 earthquake which shook Washington, D.C. Indeed, the Washington Monument not only cracked and swayed during the earthquake, causing visitors within to fall down and flee for their lives, but this historic monument has now been closed indefinitely by the National Park Service. Given the impermanence of all things, and the inevitable decay of all our teeth, we naturally asked Vermin Supreme during the debate whether our resources might better be spent in other ways besides mandatory tooth-brushing? Do we really need to carry out draconian methods to impose dental tyranny?

“As I think that totalitarian methods are already on the way to extinguish the last spark of manly independence—that is, in self-styled civilized countries—it seems to me that we all should regard with shrewd suspicion any plans for ‘perfecting’ social conditions.”

— Aleister Crowley, Magick Without Tears, Chapter LXXIV: The A∴A∴ and the Planet

Surprisingly, Vermin Supreme responded with an admission which has not yet reached the ears of mainstream media: he cursed the Washington Monument! Something must be done to stop this madman.

On the other hand, Aleister Crowley was a strong proponent of basic health care (which would include dental care) as a right to which we are all entitled. As he wrote in his “Considerations of an Open Letter to Labour”:

“… the right to medical assistance is already implied [in Liber Oz].”

This is not the same as socialized medicine, or state-sponsored medicine, or mandatory hygiene. Rather, Aleister Crowley has observed that a free society which upholds the liberty of the individual will also afford every individual the right to medical help.

Vermin Supreme has tried to shift attention away from his oppressive tooth tyranny by saying that it’s not about the dental re-education centres or the preventive dental maintenance detention facilities, nor is it about the addictive toothpaste that is to be issued by the government. He even promises that mandatory tooth-brushing is not about using genetic modifications to create a race of winged monkeys to act as tooth fairies. But can we really be sure? If we mandate tooth-brushing, we may have strong teeth, but we’ll have weak resolve, and our liberties will be threatened as winged monkeys look after our children to make sure they brush and floss after each meal. Are we really willing to send our little ones off to detention centres, transported by GMOs (Genetically Modified Orangutans)? By the way, Vermin, orangutans are apes, not monkeys!

Free Ponies for All Americans

Vermin Supreme has promised a free pony for every American. With this, he proposes to create jobs as well as reducing our dependence on oil by replacing some of it with methane. Moreover, he promises that horse poop is a great fertilizer.

While it’s great to see some innovative approaches to these problems, we have to wonder, is there a fertilizer shortage?

When we look a little more closely, we also wonder about how you can use meadow muffins as fertilizer and collect methane at the same time.

Then we begin to think about how exactly methane would be collected from the ponies. We would have to fit every pony with a fart collection device, and the horse apples would also have to be collected so that their continued production of methane could be harnessed. How would we manage all this, while also ensuring that every American keeps their pony with them at all times so that the pony could be used as identification?

Suddenly, we’re struck by a post-apocalyptic vision of cities powered by methane, ruled by crazed giants teamed up with evil genius dwarfs. Oh, right, we’ve seen this before:

No, ponies cannot be a basis for a new economy. As Aleister Crowley has pointed out in his Confessions, ponies have a remarkable weakness: “A single leech will kill a pony. It works its way up into the nostril and the pony simply bleeds to death.” Do we really want to make our economy dependent on an animal that can be killed so easily? We would have to invent entirely new methods for dealing with the potential terrorist threat of leech infestation.

A far better animal to harness in stimulating our economy, and one which Aleister Crowley would surely endorse, is the goat. Goats provide excellent fiber for clothing, and milk which can be made into yogurt, cheese, or butter, and they will eat any pernicious weeds placed before them. Moreover, goats make a wonderful symbol of liberty, as Crowley described them in Magick in Theory & Practice: “… the goats, the lonely leaping mountain-masters, separated from the gregarious huddling valley-bound sheep.”

But let’s be clear. As this campaign pointed out in our debate with Vermin Supreme, Aleister Crowley would make homosexuality mandatory for anyone who is homosexual. For those who are not homosexual, homosexuality would be forbidden. For those who are bisexual, homosexual activity would be optional. Randall Terry has a right to be heterosexual, and has an absolute right to be a ridiculous moron. Aleister Crowley’s philosophy is one which upholds the liberty of the individual, and the right of every person to live according to his or her inmost nature. As he wrote in his commentary to The Book of the Law I:51

“The Beast 666 ordains by His authority that every man, and every woman, and every intermediately-sexed individual, shall be absolutely free to interpret and communicate Self by means of any sexual practices soever, whether direct or indirect, rational or symbolic, physiologically, legally, ethically, or religiously approved or no, provided only that all parties to any act are fully aware of all implications and responsibilities thereof, and heartily agree thereto.”

A Boot is a Hat 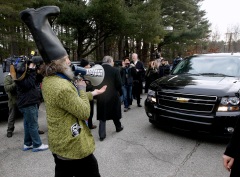 A boot is an Illusion.
A hat is an illusion.
Therefore, a boot is a hat.
So argue my friends, not distributing the middle term.

In fact, the man in Kether is out of all relation to these boots and
hats.