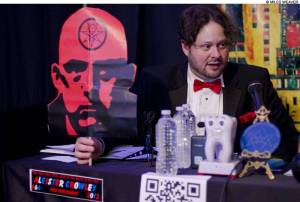 The visible appearance of Aleister Crowley, summoned with MAGICK by Frater Enatheleme

If you didn’t see our first post about the Aleister Crowley vs. Vermin Supreme debate, be sure to check that out. Also don’t miss the post where Mr. Supreme made his original challenge in the comments.

The Aleister Crowley vs. Vermin Supreme Presidential Debate was held at 8pm on Friday, October 28, 2011 in Salem, Massachusetts. That’s right, Salem on the weekend of Halloween. The organization that hosted the event is Knights Templar Oasis, O.T.O., in the heart of the pedestrian shopping (and Halloween reveling) district at 175 Essex St., on the second floor.

The debate was moderated by David S. Bernstein, who covers local, state, and national politics for the Boston Phoenix and wrote about the early debate negotiations in spring. 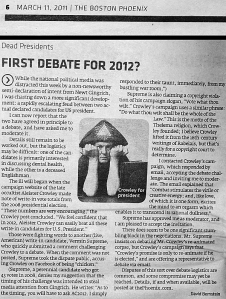 AC2012 and Vermin Supreme in the Boston Phoenix (click to zoom)

We realize that Aleister Crowley is dead. And British. And, moreover, not running for office. Nevertheless, we believe that the most effective vote you can cast in 2012 is one for Aleister Crowley. “The absolute rule of the state shall be a function of the absolute liberty of each individual will.”
View all posts by ac2012 →
This entry was posted in AC2012 Pics, Aleister Crowley 2012 and tagged aleister crowley, david s. bernstein, debate, election, ordo templi orientis, politics, president, the boston phoenix, thelema, vermin supreme. Bookmark the permalink.