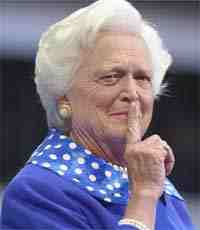 Barbara Bush is not Aleister Crowleys daughter, but she knows how to banish!

Barbara Bush is NOT Aleister Crowley’s daughter. Shocker, right? As a matter of fact, there is NO evidence that Aleister Crowley ever met Bush’s mother, Pauline Pierce, at all, despite the claims in the hoax). Sadly, Snopes has not yet made time to discredit this ridiculous claim; in the meantime, AC2012 must take up the task.

Thing is, this April Fool’s joke (note the date of the post) has made the rounds, and is now cited as evidence (oftentimes along with spooky music and suggestive questions) that Aleister Crowley really is the father of Barbara Bush and the grandfather of George W. Bush! Alex Jones and “Freeman” have also taken this idea and run with it, and are seemingly also taking credit for the “theory” themselves. This hoax has somehow even made it into the popular In Search of the Great Beast documentary, which leads one to wonder about the journalistic standards applied there. Past examples of April Fool’s jokes on the Cannonfire blog also include: photos of Ann Coulter’s pre-op penis; a hypothesis that Hillary Clinton was connected to the assassination of JFK; a claim that Obama wrote a set of Marxist “rules for revolution”; a conspiracy connecting Aleister Crowley, Gerald Gardner, and JFK; and comic book conspiracies involving occult disaster predictions. Citing Cannonfire’s April Fool’s post as evidence is even more hilarious than seeing Chick Publications quoting Léo Taxil to prove that Freemasonry is Satanic (if only)!

“The Fool stirs within all of us at the return of Spring, and be cause we are a little bewildered, a little embarrassed, it has been thought a salutary custom to externalise the subconscious impulse by ceremonial means.” — Aleister Crowley in The Book of Thoth

Check out (and share!) our new video featuring ominous music, suggestive questions, and the stunning truth that has never yet been told on YouTube! Please share this video and spread the news that the rumors about Aleister Crowley being the father of Barbara Bush are simply false.

It appears that Cannonfire has given us a very subtle nod in their 2011 April Fool’s post. The suggestive “evidence” presented in this year’s hoax comes thanks to the testimony of one “Diana V.,” a reference to Léo Taxil’s fictional star witness, Diana Vaughan, mentioned above. If the original joke fooled you, don’t feel bad. We understand completely the desire to see a Crowley in the White House. After all, Aleister Crowley’s philosophy is to establish individual liberty and the sovereignty of the will as the basis of government. Write in Aleister Crowley in 2012! 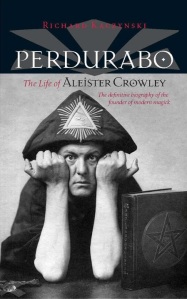 “The Bush story was first posted ages ago as an April Fool’s joke. It was pretty funny at the time, but since then has taken on a life of its own thanks to conspiracy theorists who uncritically accept and repeat it as fact. It has even been repeated in a Crowley documentary that failed to do its homework. But it just ain’t true.”

Thanks to Cannonfire for the favor of linking to AC2012 in the latest Cannonfire blog post!

Cannonfire has a new April fool’s day post, today, which draws a connection between Aleister Crowley and JFK, via the Thelemite founder of Wicca, Gerald Gardner! A hilarious post that is well worth checking out.

Jeb Bush is running for President in the Republican Primary. This meme was spotted on the Interwebs:

It turns out, Jeb Bush and Aleister Crowley both look like middle-aged white men. Cue the spooky music.

We realize that Aleister Crowley is dead. And British. And, moreover, not running for office. Nevertheless, we believe that the most effective vote you can cast in 2012 is one for Aleister Crowley. “The absolute rule of the state shall be a function of the absolute liberty of each individual will.”
View all posts by ac2012 →
This entry was posted in Aleister Crowley 2012, Crowley Myths, Pop Culture and tagged aleister crowley, ann coulter, april fools, barbara bush, cannonfire, conspiracy, diana vaughan, election, freedom, freemasonry, george bush, gerald gardner, hoax, jfk, léo taxil, liberty, marx, obama, occult, perdurabo, politics, richard kaczynski, snopes, thelema. Bookmark the permalink.