The headline in the Daily Mail should be “Savage Rapist in Wales Convicted.” Sadly, however, this sensationalist tabloid chose to play up bigoted buzz-words to unfairly malign all who take the writings of Aleister Crowley seriously.

There is no question that the terrible abuse of children and adults in the Welsh town of Kidwelly, at the hands of Colin Batley and his acolytes, was a terrible violation of their rights and contrary to the Law of Thelema. As Aleister Crowley wrote in his commentary on The Book of the Law:

“… acts invasive of another individual’s equal rights are implicitly self-aggressions. … Such acts as rape, and the assault or seduction of infants, may therefore be justly regarded as offences against the Law of Liberty, and repressed in the interests of that Law.”

The article (and the prosecution) quoted (and misquoted) from Crowley’s writings–out of context and without his extensive clarifying commentary–using the old tired sensationalist approach and representing Crowley as “the most notorious Satanist of the 20th century” and alluding to the “open marriage” and “matching tattoos” of the group.

We can’t imagine why the so-called journalists covering this story chose to hype it up with nonsense. This is a rapist we are talking about, who committed terrible, unspeakable acts against children. Surely that is enough, and alluding to tattoos and unconventional relationships is a bit unnecessary.

Worse, however, is the fact that the prosecution effectively demonized all those who study the works of Aleister Crowley by alleging that these terrible actions had been inspired by The Book of the Law and selectively picking out sentences and phrases from Crowley’s voluminous output to do this. (This has happened before.)

Here are the quotations cited in the article, along with our rebuttal:

“Let all chaste women be despised.”

This is a misquote of Chapter III, verse 55 of The Book of the Law, which reads:

“Let Mary inviolate be torn upon wheels: for her sake let all chaste women be utterly despised among you!”

Crowley’s commentary on this is lengthy and can be found in its entirety in The Law is for All, available via any major bookseller. It is impossible to summarize, containing as it does qabalistic analysis, biblical exegesis, as well as political commentary. It is, however, clear in the following excerpt that Crowley offered a strong criticism of the Christian culture which holds virginity as an absolute virtue:

“Women under Christianity are kept virgin for the market as Strasbourg geese are nailed to boards till their livers putrefy. The nature of woman has been corrupted, her hope of a soul thwarted, her proper pleasure balked, and her mind poisoned, to titillate the jaded palates of senile bankers and ambassadors.”

Twisting this liberation of women’s sexuality into a coercion to force them to perform sexual acts against their will would not only be Thelemic heresy, but religious coercion is a most disturbing form of rape.

“Sex with anyone is not just permissible but to be encouraged.”

This simply does not appear anywhere in the writings of Aleister Crowley. Nor does it really make sense as something that might be a paraphrase. Aleister Crowley’s philosophy was “Do what thou wilt,” and this is an injunction to fulfill one’s innermost nature, not to wantonly pursue sex with any random person.

“Some of the most passionate and permanent attachments have begun with rape. Rome was founded thereon.”

This is actually an accurate quotation of Aleister Crowley, for once, but it is not from The Book of the Law, but rather it is from Crowley’s commentary, mentioned above. Crowley is quite correct in his depiction of the legend of Rome’s founding, for the twins Romulus and Remus were said to be the result of the rape of Rhea Silvia by Mars, god of war. There are many examples of legendary couplings which began in coercion and resulted in “passionate and permanent” attachments. For any number of examples, see all of Greek mythology. Aleister Crowley also depicted such a union in his play, “The Scorpion.”

What, though, was Crowley really saying here? It’s one thing to assert a fact of mythological history; quite another to assert that this gives license to rape. Let’s look at a bit more of the context where this passage appears:

“The sexual act is a sacrament of Will. To profane it is the great offence. All true expression of it is lawful; all suppression or distortion is contrary to the Law of Liberty. To use legal or financial constraint to compel either abstention or submission, is entirely horrible, unnatural and absurd. Physical constraint, up to a certain point, is not so seriously wrong; for it has its roots in the original sex-conflict which we see in animals, and has often the effect of exciting Love in his highest and noblest shape. Some of the most passionate and permanent attachments have begun with rape. Rome was actually founded thereon.” (Emphasis added.)

It appears that Crowley was doing little more than offering a defense of consensual rough sex, while alluding romantically to nature and legends where physical constraint in the act of love can often be seen. Given the above passage, along with the numerous other places within the same book where rape, molestation of children, and human property are routinely forbidden as contrary to the Law of Liberty, it’s quite plain that nobody making a serious study of Crowley’s writings could honestly find inspiration for such terrible crimes.

‎”There shall be no property in human flesh.’ Nobody has a right to say what anyone else shall or shall not do with his or her body.”

Now we’ve established that the terrible crimes committed by Batley have no basis in Thelema or the writings of Aleister Crowley, it’s rather interesting to note that Batley actually disclaims any interest in Thelema, saying that he “gave up” trying to read Crowley and that he’s actually a devout Mormon. This, somehow, makes much more sense.

Finally, we’d like to point out that it is very common for people to scapegoat Aleister Crowley and project their inmost fears on him. By and large, however, the groups which are accused of child molestation and rape occur in every denomination of every religion. We see it in small groups professing various interpretations of Christianity, Islam, Budddhism, and more. It is really uncalled-for, but predictable, to associate criminal behavior with a person’s religious views. Rape and abuse are illegal. Let’s prosecute that.

“The essence of crime is that it restricts the freedom of the individual outraged. (Thus, murder restricts his right to live; robbery, his right to enjoy the fruits of his labour; coining, his right to the guarantee of the state that he shall barter in security; etc.) It is then the common duty to prevent crime by segregating the criminal, and by the threat of reprisals; also, to teach the criminal that his acts, being analyzed, are contrary to his own True Will. (This may often be accomplished by taking from him the right which he has denied to others; as by outlawing the thief, so that he feels constant anxiety for the safety of his own possessions, removed from the ward of the State.) The rule is quite simple. He who violated any right declares magically that it does not exist; therefore it no longer does so, for him.

“Crime being a direct spiritual violation of the Law of Thelema, it should not be tolerated in the community.” 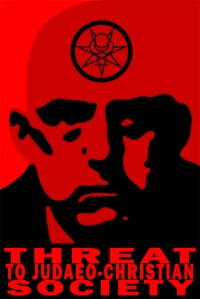 Aleister Crowley 2012 is a threat to Judaeo-Christian society

We realize that Aleister Crowley is dead. And British. And, moreover, not running for office. Nevertheless, we believe that the most effective vote you can cast in 2012 is one for Aleister Crowley. “The absolute rule of the state shall be a function of the absolute liberty of each individual will.”
View all posts by ac2012 →
This entry was posted in Aleister Crowley 2012, Crowley Myths, Political Positions and tagged 2012, aleister crowley, children's rights, election, freedom of religion, human rights, liberty, sexual freedom, thelema, violence, women's issues. Bookmark the permalink.

21 Responses to Pedophiles in Wales