Thanks Frank Zappa and Pauline Butcher!

We would like to take a moment to thank Frank Zappa and Pauline Butcher (Zappa’s personal secretary from 1968-1972), for helping to raise awareness about Aleister Crowley in the lead-up to the 2012 election. 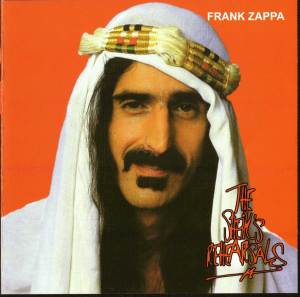 In Butcher’s new book, Freak Out! My Life with Frank Zappa, she offers the stunning revelation that musician and outspoken libertarian Frank Zappa and his second wife Gail had a keen interest in Aleister Crowley.

“Gail [Zappa] put the scissors down and ran her hands through Frank [Zappa]’s hair, lifting and moulding it with her fingers. I blamed Aleister Crowley, whose book they’d recently acquired. Gail had started using words like occult and mysticism and alchemy. ‘The tension between male and female,’ Crowley claimed, ‘is fundamental to existence and sexual magic.’ He saw women’s role as subjugated to man, a role that Gail seemed happy to accept, and Frank wholeheartedly concurred.”

As interesting as this revelation is, it demonstrates that Aleister Crowley remains poorly understood, even among those who read his work. Frank and Gail Zappa may have found fulfillment of their individual wills in the way they related to each other, but Aleister Crowley did not see woman’s role as subjugated to man. Actually, we’re not convinced that Frank Zappa saw it that way either. It’s not like he could cut his own hair.

Of course it is fair to say that Crowley’s opinion of women was conflicted at best, and there are certainly many examples of sexist comments from Crowley in his personal writings, but his philosophy, the religious doctrine of Thelema, is adamant that women and men are equal.

“We of Thelema say that ‘Every man and every woman is a star.’ We do not fool and flatter women; we do not despise and abuse them. To us a woman is Herself, absolute, original, independent, free, self-justified, exactly as a man is.

“We dare not thwart Her Going, Goddess she! We arrogate no right upon Her will; we claim not to deflect Her development, to dispose of Her desires, or to determine Her destiny. She is Her own sole arbiter; we ask no more than to supply our strength to Her, whose natural weakness else were prey to the world’s pressure. Nay more, it were too zealous even to guard Her in Her Going; for She were best by Her own self-reliance to win Her own way forth!

“We do not want Her as a slave; we want Her free and royal, whether Her love fight death in our arms by night, or Her loyalty ride by day beside us in the Charge of the Battle of Life.”

— The Law is for All

Butcher quotes Crowley as having said, “The tension between male and female is fundamental to existence and sexual magic.” We’re not sure where Crowley might have said that, but it’s certainly in line with his general thinking on the subject.  In fact, Aleister Crowley felt that we must each equilibrate the masculine and feminine within ourselves in a process of spiritual-sexual alchemy:

“[Those who understand the Riddle of Holiness] must have gone further yet, beyond the fundamental opposition of the sexes. The male must have completed himself and become androgyne; the female, and become gynander. This incompleteness imprisons the soul. To think ‘I am not woman, but man’ or vice versa, is to limit one’s self, to set a bar to one’s motion.”

— Commentaries on the Holy Books and Other Papers, commentary on Liber LXV, v. 44.

Click here for more quotes from Aleister Crowley about women and their status within his religious philosophy of Thelema. Also you can learn more about Aleister Crowley’s sexual magick in our post on the Eucharist of Life.

In her memoir, Pauline Butcher also seems a bit confused about why Frank Zappa would be interested in the work of Aleister Crowley:

“If I could vaguely understand Gail’s interest in Crowley, I could not fathom Frank’s, a man who exuded rationality.”

“We must not suppose for an instant that The Book of the Law is opposed to reason. On the contrary, its own claim to authority rests upon reason, and nothing else. It disdains the arts of the orator. It makes reason the autocrat of the mind. But that very fact emphasizes that the mind should attend to its own business. It should not transgress its limits. It should be a perfect machine, an apparatus for representing the universe accurately and impartially to its master. The Self, its Will, and its Apprehension, should be utterly beyond it.”

At the same time, Crowley recognized that there are many aspects of existence which are beyond our current understanding, and perhaps even beyond our capacity to understand. As he wrote in The Book of Lies, “… that which can be thought is not true.”

Click here for more quotations from Aleister Crowley on the subjects of thought, reason, and the mind.

Frank Zappa also felt that some things are difficult to explain with the current scientific understanding of the world. Pauline Butcher quotes Zappa as saying, “I think that some of the things we experience as weird phenomenon [sic] will one day be explained in the future by physics when we have the tools to give rational explanations to stuff that today is just too scary.” This is something that Aleister Crowley also believed, and he postulated that one day, science would offer an understanding of religious experiences. Stay tuned for a post on this subject, when we explore Aleister Crowley’s attitude toward science and the role of science in his religious philosophy.

Check out our earlier posts where we have thanked other figures in pop culture for their recent mentions of Aleister Crowley, including Kanye West, Jay-Z, Russell Brand, Steven Tyler, and Kevin Jonas.

UPDATE 1/29/2012: One of our readers has pointed out that Aleister Crowley is acknowledged in the 4-disc special edition of The Making Of Freak Out: An FZ Audio Documentary, which was posthumously released by the Zappa Family Trust. Aleister Crowley is listed between Lily Tomlin and Keith Richards.

We realize that Aleister Crowley is dead. And British. And, moreover, not running for office. Nevertheless, we believe that the most effective vote you can cast in 2012 is one for Aleister Crowley. “The absolute rule of the state shall be a function of the absolute liberty of each individual will.”
View all posts by ac2012 →
This entry was posted in Aleister Crowley 2012, Pop Culture and tagged 2012, alchemy, aleister crowley, election, equality, frank zappa, freak out, gail zappa, jay-z, kanye west, kevin jonas, libertarian, liberty, mysticism, pauline butcher, politics, reason, russell brand, science, sex, sexual freedom, sexual magic, sheik yerbouti, steven tyler, thelema. Bookmark the permalink.

20 Responses to Thanks Frank Zappa and Pauline Butcher!